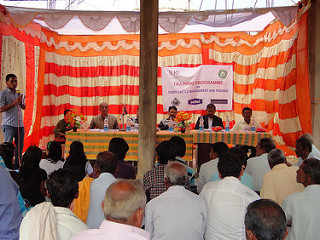 The seemingly sleepy village at the end of the road is not so sleepy after all.

Guagadia village produced an overnight entrepreneur, one who had never imagined he would ever do anything beyond feeding his dairy cattle, milking them and selling the milk to the local dairy Orissa State Cooperative Milk Producers’ Federation (OMFED). When the workers of the feed supplier OMFED went on strike, Kishore Kumar, a small-scale dairy farmer, found himself  adapting to desperate measures. What on earth was he going to feed his cows?

At about the same time, Pradeep Kumar Sahoo, research associate (field coordinator) for the International Livestock Research Institute (ILRI) in Odisha, was in the area visiting farmers who had adopted ILRI’s technology and scouting for more. Kumar, driven by his love for his cows, asked Sahoo for help. A phone call later, Sahoo and his supervisor Braja Swain from New Delhi, started arranging a training workshop for Kumar and the farmers of Guagadia village.

The training was organized in Bhubaneswar, the capital of the state of Odisha, with the collaboration of Department of Animal Nutrition, College of Veterinary Science & Animal Husbandry and the Odisha University of Agriculture and Technology (OUAT). They were taught how to mix balanced concentrate feed, how to chop straw and soak it to feed the cattle as well as entrepreneurship skills. ILRI’s approach is to teach the farmers to make the concentrate feed using locally available materials. Sometimes farmers buy what materials from local markets or from a neighbors.

Desperate times call for desperate measures. Kishore Kumar was forced to turn into a businessman by the need to keep his cattle alive when the dairy board workers went on strike and failed to supply feed.

The farmers’ training program and demonstration trials on ‘crop residue based feeding strategies –feeding chopped rice straw supplementation with mineral mixture and self-preparation of concentrate feed- to improve milk production of dairy animals’ was on held 9 August 2014. It was organized by ILRI under the Cereal System Initiatives for South Asia (CSISA) Project. Four days later, Kumar started making his own concentrate feed. In three months, he turned out to be the entrepreneur, making feed for his cattle and selling the extra to villagers who either lacked the time or the finances to purchase what they did not have on their farm. Most of the farmers in the neighboring six villages have adopted the concentrate feeding practice and have also now learnt the importance of quality control in concentrate feed production and keep a hawk eye on the process.

At one time, to reduce the cost of concentrated feed, Kumar diluted his inputs. Before long, the villagers noticed that the productivity of their animals as well as their health was declining. They told him they preferred paying the higher amount but without the compromise in quality.

It is this responsiveness displayed first by Sahoo and Swain and later by the farmer-turned-entrepreneur, Kumar, which endears the farmers here besides the good quality of the feed they get for their animals. The demand for the feed is growing. While Kumar initially made the feed for his cows, he is now supplying eight other farmers who had attended the training with him and the farmers in the surrounding six villages. The farmers like the consistency of the feed supplied plus they get to chop their straw in Kumar’s farm when they come to deliver the milk.

‘Farmers are happy that they get direct access to him (Kishore) and can complain if anything goes wrong,’ says Sahoo.

On the other hand, Kumar knows that for support he can always turn to a listening ear – ILRI. Realising that he cannot meet local demand and knowing also he received a good product from ILRI that farmers want and skills to last for a lifetime, he asks: ‘Can I make the f­­­­eed and brand it ILRI?’

‘People here trust the ILRI name,’ he says. From his savings Kumar has already bought sacks, a weighing machine and a sealing machine for the feed in a bid to ensure he sells the right quantities and the best quality. He took out a loan with a local financial institution which he used to acquire a tractor to carry the rice straw from the fields and the ingredients bought from the local market for preparing the concentrated feed for his dairy animals. He feels stretched with the rising demand and the desire to put into practice all that he has learnt from ILRI. He hopes that ILRI can support him to stabilise and make his business more reliable, recognising that he became a businessman out of necessity.